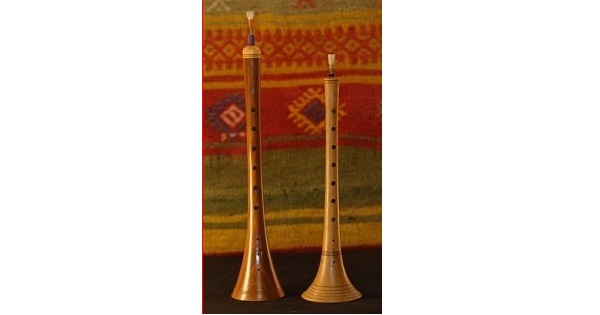 Pictured are two types of zourna. On the left an instrument form Turkey and on the right one from Syria. Source: Wikipedia

The Zourna or Zournas, is a double reed musical instrument of the oboe family of woodwind instruments. The oboe was used in ancient Greece in theatre and during other important occasions. The zourna was played in the Pontus region of north-eastern Turkey and is still used widely today in Pontic music. The word zourna is Turkish in origin. The Pontic Greeks referred to the double reed as ‘o petinos', in other words, the rooster.

The instrument is made in various sizes ranging from 22 - 60 cm in length from a variety of wood types including beech, cherry, walnut, olive tree, black mulberry, apricot, loquat, heath (Erica sp), maple and rarely from ebony and cane. Each zourna comprises three parts: the main zourna, the klefti, and the kaneli.

The zourna has 7 frontal holes, which are usually round and equidistant from one another, as well as a thumb hole which is located at the rear of the instrument. The rear hole is situated roughly between the first and second holes, or sometimes above the first hole. Apart from these, the zourna has other holes at the lower part of the instrument, but these aren't used by the player and remain open during play, and contribute to the quality of the sound.

While playing, the mouthpiece is completely inserted into the player's mouth. When the player blows into the mouthpiece, the two lips palpitate against each other thus creating the sound. Due to its sharp and penetrating sound, the instrument is usually played outdoors or in open spaces, and is always played accompanied by the daouli (drum). One zourna usually accompanies one daouli or two zourna with two daouli.