The following are the music notes:

The # sign is the diesis and represents a slight change in tone, similar to the difference in tone between the black and white keys on a piano. 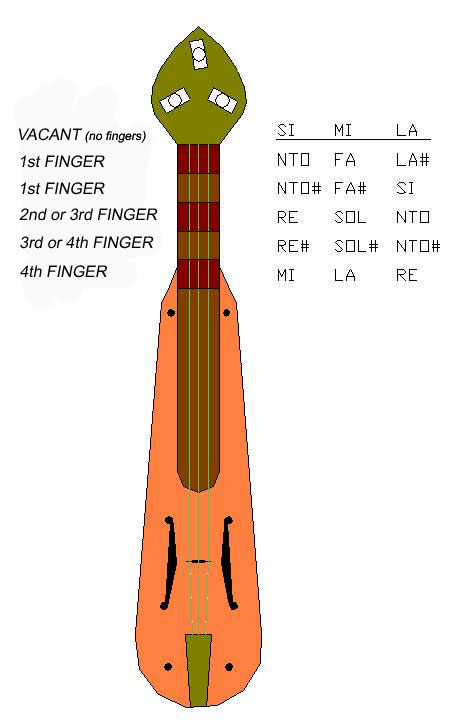 If we want to play higher notes, the 2nd finger will come down and touch the same spot where the 4th finger was previously. The 4th finger henceforth corresponds to the note MI.

ZIL AND MIDDLE CHORDS TOGETHER

When the finger touches both the ZIL chord and the MIDDLE chord together, the combinations are as follows:

To play higher notes, the same applies as previously.

a) When touching both ZIL and MIDDLE chords, the 4th finger touches only the ZIL chord.
b) The reason why the 1st finger now plays LA# instead of SI, is due to the finger now touching 2 chords instead of one, and it now plays a slightly higher pitch.

When playing MIDDLE chord, the combinations are as follows. When the finger touches both the MI and SI chords at the same time, then we have:

When the MIDDLE chord is played on it's own, the following applies: