The Greek Population of Turkey, 2.7 million

According to Tsirkinidis.in his book titled The Concise History of the Genocide of the Greeks of Anatolia (Kyriakidis Publishers, 2009, in Greek)

French author Victor Bérard in his book titled La mort d'Istanbul (Paris 1913) states, that in the first elections of 1908, 23 Greeks were elected into parliament. Turks intervened and the results of the election became partial. Elections were often violent in Turkey the end result always being that the Neo Turks were always elected.

In the elections of 1912, there was even more violence and the elections were titled ‘The elections of the big batons'. 27 Greek political representatives were elected, 7 of which represented the Greeks in the Pontus region. According to election rules, minorities were able to elect one representative for every 100.000 residents. Consequently the Turks accepted that the total population of Greeks in Turkey was 2.7 million.

It was known that in order to avoid being taxed (per capita), men being drafted into the army, and women being stolen away especially during times of crisis, the Greeks wouldn't declare all their family members as being Greek. As a result the Greek population would more likely have been 3 million. French Teacher Ernest Lémonon agreed with the above reasoning and in an article in ‘Le Temps' newspaper in 1918 wrote,..‘The Greeks of Asia Minor and Pontus number 2.5 million. However there are a further 600.000 Greeks who the Turks don't account for in their statistics because they speak Turkish and not Greek.' 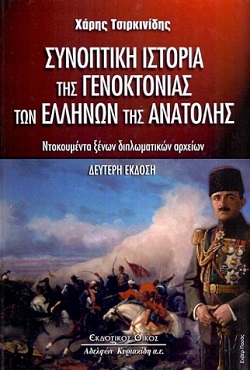