The Seagull and the Stone 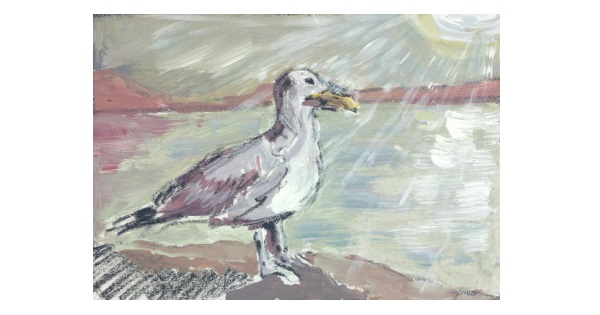 What would a conversation between a seagull and a stone sound like? In this fictional piece by Giannis Haritantis, author of Odos Euxeinou Pontou (Black Sea Street), a seagull is startled when a stone on a beach-side in Greece starts talking. Much to their surprise, they both have a lot to say, and quickly learn of their differing perspectives on life.

This is something like how the story began, one summer day, at daybreak, on a beautiful seashore in Greece.

The wind had died down early the night before, discreetly allowing the sea to fondle the shore, until, seduced, the last had fallen asleep.

There wasn't the sound of the faintest ripple. The wave lapped lightly against the sand, as if only to underline its presence.
The morning sun was more than keen to lavishly bathe the shore in golden rays of light.

And as the light skimmed over the earth, it magnified the shadow of every pebble. You should see then how each grain of sand imagined itself turned suddenly into a golden rock and strove to trick nature by returning the light like another tiny sun. That was its own special way of giving thanks. Such images cannot be put to words, nor captured in pictures, so that this mystery may be revealed, always animate, to the eyes alone.

This was the moment the seagull was waiting for, when he decided to take his morning walk along the untrodden, wet sea-strand, as was his habit.