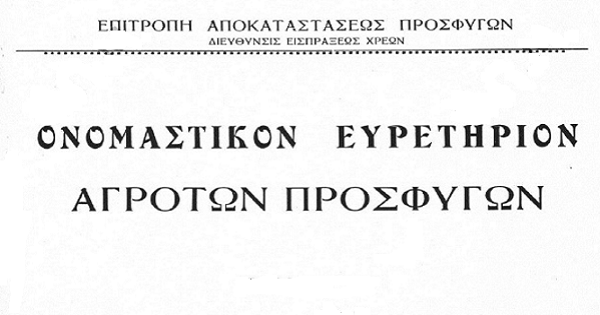 The following directories were published in Athens in 1928 by the Refugee Resettlement Commission (Epitropi Apokatastaseos Prosfygon) and contain a list of Ottoman Greek refugees who were expelled from their homeland in the former Ottoman Empire (today Turkey) and settled in Greece. The directories only contain the names of "the heads of rural families as well as members of families who were (according to their claims) entitled to an exchange allowance." The names of Ottoman Greek refugees who did not satisfy this criteria are not included.

Note: The directories include Greeks from all regions of the former Ottoman Empire including Asia Minor and Eastern Thrace.

You can either view the directories at Scribd.com (membership required) or you can view and download them for free at the link below. The website is in Greek but you will find the directories listed at the bottom of the article in alphabetical order. To start your search, firstly find the directory based on the first letter of your ancestor's surname. In that directory, you will see the refugee's name, which village or town they arrived from, and a number. To find out where they were settled, you will need that number. Then, go to the beginning of the directory titled Α εώς Αναγκίστου. You will find tables with numbers and places in Greece. Now search for that number to see which region or village they were settled in. The very first catalogue located at the top contains directions on how to use the catalogues however it is in Greek. The directions we've provided here should suffice.