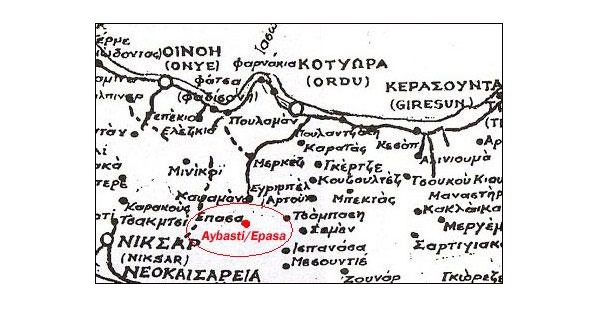 Aybasti (Gr: Αϊμπαστί) is a town and region in northern Turkey that is identified with ancient Epasa (Gr: Έπασα). It is located approximately 70km SW of Ordu. The region is rich in archaeological findings and historical monuments, such as the church Karatzali (Karacali Kilisesi) and the ruins of the baths Safalik (Sefalik) in the village of the same name. Anthony Bryer states that Bartae is identified as Aybasti.

The Greek villages of the Aybasti region are as follows:

A small Greek village which was located 5 km from another Greek village named Ayianton (St. Anton) in the Ordu province of the Trebizond vilayet. Up until the exchange of popoulations (1923), Kayialti comprised 30 Greek families who gradually made their way to Greece in the final years and even until 1926. The hardships for the Greeks of Kayialti started around 1908 when the Turks began conscripting them into the Ottoman Army which resulted in all the families except for two fleeing to Sohoumi in Russia.

The Greeks of Kayialti had one church, St George. Most of their houses were double storey and were made of stone. The ground floor was made of stone and the remainder of the house was made of wood. The rooves were made of wood (4 sided rooves). The village had its own 4 grade primary school and comprised one teacher and roughly 60 students. The village was also called Yaalti (Γάαλτι).

A Greek village which was located 5 km from Kayialti in the Ordu province of the vilayet of Trabzon. Up until 1923 the village comprised 20 Greek families (some Greek speaking) who in 1926 made their way to Greece following the Exchange of Populations (1923).

Also known as Konahiani or Gonahiani (Κονάχιανη or Γονάχιανη). A Greek village located 10 km from Ayianton in the Kotyora/Ordu province of he Trebizond vilayet. Up until the Exchange (1923) the village comprised 70 Greek families many of which moved to Ayio Antonio in Halkidiki (Greece) between the years 1920-1926. Fifteen families moved to Triadi, 30 families to Arethousa, 3 families to Nipa (Aleksandroupolis), 6 families to Makriyialo, 3 families to Upper Ayio Ioanni (Katerini), 2 families to Katerini as well as other regions in Greece.

A Greek village of the Ordu region which was located 15 km from another Greek village named Kayialti. Up until the First World War the village comprised 40 Greek speaking Christian families. During WW1 many of the inhabitants fled initially to Tsevislik in the Sokhumi region, but following the Exchange (1923) they made their way to Greece and settled in the Monolothos region of Greece as well as other places such as Petroto (Yeni Mahalle), Ayio Antonio (Dogantzi) and other places.

A mountainous village of Pontus which up until 1926 comprised 150 Greek-speaking Greek families. The village was founded around 1885 by the Greeks of the surrounding 13 villages of Ordu, Trabzon. In 1920-21 the Greeks of Ayianton took part in moves towards an autonomic Pontic state. However before they took part in any serious rebellious actions, the Turks caught wind of it and in order to terrorise them, they arrested 6 elders with the intent to send them to the Amasya Courts of Independence. They were all saved however due to the intervention of Alisman Pasha.

Between June and September of 1921 the Turks arrested all of the village's inhabitants and sent them into exile into the inner regions of Asia Minor. Following one year of movements and extreme hardships they reached Diyarbekir and Silvan (Farkin). In June of 1922 they were again sent back to Diyarbekir where they stayed until October. On the eve of 1923 they were sent to Souverek and from there to Urfa (ancient Edessa) close to the Euphrates. Then they crossed the river and they entered Syria and arrived at Aleppo where they stayed for 22 days. Those that survived the hardships were then separated into 2 groups, one of which went to Virito and from there they got onto ships and were sent to Peiraus, and from there Salonica and from there to the region of Dogantzi in Halkidiki. The other group departed from Aleppo by train and arrived in Tripoli (Lebanon) and from there they boarded a ship and arrived in Patra (Greece). The following day they left Patra and arrived the next day in Pilaro (Kefallinia) where they stayed for 9 months. They then sailed to Kavalla and from there via Stavrou they arrived on the 20th of September 1923 in Thessaloniki.

The few that managed to flee from the arrests and exile/death marches in 1921, fled to the mountains. When the Exchange between Greece and Turkey was announced in 1923 they boarded ships from Ordu and arrived in Paireus (Greece). From there they were transported by train to Larissa where they stayed for a short period and then again they boarded trains to Thessaloniki and from there by foot they arrived in Dogantzi. 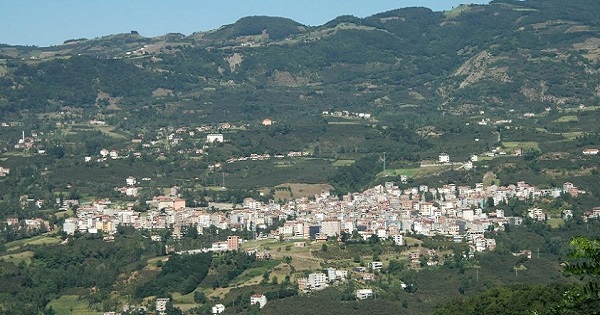